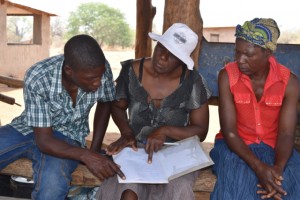 30 years ago, Christmas 1984, a group of prominent musicians from the UK and USA got together for “Band Aid” and recorded the Christmas anthem “Feed the World”.

Their aim was to raise awareness of, and funds, for people in Africa who were experiencing severe drought and famine. Amidst the well-meaning sentiment and good intentions, many of us didn’t take the time to reflect so deeply on the words – or maybe that was just where we were at that time in the learning journey that comes from living history. But last Christmas, in 2015 this same song was re-released.

It’s hard not to sing along to the old, familiar tune. However have you ever stopped to listen to the words? Here’s just a few:

“But say a prayer, pray for the other ones”

“There’s a world outside your window, and it’s a world of dread and fear”

“Well, tonight thank God its them instead of you”!

“And there won’t be snow in Africa this Christmas”

“Where nothing ever grows, no rain nor rivers flows”

“Do they know it’s Christmas time at all?”

“Give a little to help the helpless.”

At its foundation, this song is based on the “us and them” paradigm with “the other ones” being the ones “we” are thankful that we are not. It portrays Africa as a place where water doesn’t flow, where plants don’t grow and where they won’t see snow, and then poses the question, “Do they know it’s Christmas time at all”?  Are you cringing just a little bit? Apart from a few glaring geographical clangers – Africa is home to some of the mightiest rivers in the world, including the Nile, the Congo and the Zambezi to name just a few- there’s the fact that in the Southern Hemisphere, like in Australia, Christmas falls in summertime so snow really isn’t likely any Christmas.

But on a deeper level, there’s a shallow assumption that African peoples are characterised by ignorance, limited capacity, fear and doom. These are people sitting waiting, looking to the “outside” to be the engineers of their survival. It sees all Africans as those hungry, helpless children promoted on our TV screens and appoints Western “developed” societies as the source and bringers of hope and rescue. Yet in essence, this tune reflects more honestly on the perspectives of the writers than any African reality.

Today I’m sitting in a plane on the tarmac in Zimbabwe, waiting for the last passengers to board before embarking on the 35 hour journey home. I have been meeting with MeDRA, our Development Partners of the Methodist Church of Zimbabwe. It is an exciting time for MeDRA, for the Methodist Church of Zimbabwe and this Partnership with the UCA through UnitingWorld. And in the light of the last few days, the words in this outdated Christmas anthem couldn’t be further from the truth.

During the Strategic Planning process we reflected on the Partnership between UnitingWorld and MeDRA, a partnership that spans nearly ten years.  The Uniting Church in Australia still remains their strongest partner. Just as I’ve reflected on the above anthem, words matter, and the word partnership is not used lightly. UnitingWorld isn’t just a “donor agency” or “funding partner” to MeDRA, but a genuine Partner. And as partners we share together, learn together and walk together in God’s global mission. Each of us has our role to play. UnitingWorld cannot do the work that MeDRA does – not successfully anyway. Working with MeDRA and our other Development Partners allows us, as the Uniting Church in Australia to participate effectively in this global mission. And partnering with UnitingWorld supports MeDRA by enabling professional capacity building, organisational strengthening as well as funding for their vital work on the ground. This work brings opportunity, hope, dignity and love to some of Zimbabwe’s poorest and most vulnerable communities.  It’s a true witness to God.

Let me share just a little about the people who make up this organisation. They are Zimbabweans and they know their country, their culture and the context. They are committed development professionals who know the need but choose to focus on the strengths and opportunities. They don’t do the life-changing work for the people in the communities they serve. Rather they support these communities to develop their own potential and empower them to be the agents of their own transformation. And above all things, they are committed to living out their faith and being a genuine witness to Christ in the communities they serve.

And then there are the people living in the communities themselves. The context in which they live is harsh. They are far away from city services, in places where the soil is dry and hard, the temperatures scorching and the impact of drought an everyday reality. It is a tough existence and yet they are resilient and they survive. Through MeDRA they are accessing training and as community groups, developing livelihoods strategies to increase their access to income. This enables them to send their children to school and look to a future for their children that has more opportunities than they themselves have experienced. And they are embracing this chance with both hands and thriving in it.

But if that wasn’t encouraging enough, here’s the kicker. From the profits that each group makes, some is set aside to reinvest into the business, yet before the remaining profits are shared among the group, some is allocated to support other vulnerable people in their communities – widows, orphans, single mothers, etc. They see this as their social responsibility. They were once the most vulnerable but now they have opportunity, they are building something together, they have discovered their God-given dignity and with that their responsibility to others in their community. It’s hard work, but they embrace it and they do it and they are succeeding in it. And they are paying it forward.

These people are not helpless. They just need a chance. Through the partnership between MeDRA and UnitingWorld, many are now able to embrace such a chance. I visited some of these communities last year, and I saw nothing of our Western Christmas anthem anywhere. Instead I saw potential, I saw hope, I saw dignity and I sat at their feet to learn.

This Lent, let us be the ones transformed, let us have God’s eyes to see hope and potential where others would tell us there is helplessness; give us ears to hear the invitation to participate effectively and give us humble hearts to learn what we need to learn and to give what we can.

And for the record, for those in Africa who share our faith, yes they do know when it’s Christmas time, even without the snow!

Watch the people of Zimbabwe at work here.