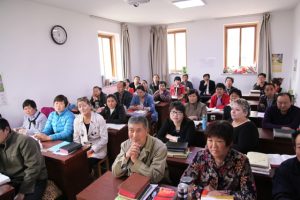 China is an ageing society. Currently 200 million people are over 60 years old, a figure that will double in the next 20 years. Yet half of the elderly are empty nesters – living without children or family – and this is a problem in the Confucian culture where “getting old means being cared for by the young 老有所养”. This has always been a moral code, but it is now not so easy to live out. If the church could look after the elderly, particularly offering care for the dying, then the church’s desire to grow also has a social purpose.

When the UCA delegation arrived about midnight in Jinan, the Moderator and his team were waiting at the station. We were told our operational team, sent ahead to carry out training in Aged Care, had performed exceptionally well. The training had gathered 100 ministers and managers from 85 Aged Care facilities in 22 provinces. The conference room was on the 17th floor of the biggest non-government publishing company in China. The CEO, Mr Zhang Quan, became a Christian 11 years ago, and he attributed his success to God’s blessings. He has committed himself to Christian business practices and supporting care for the elderly. The company edited the training materials in both languages and printed the papers in a 40-page book.

“End of Life Care” is a special skill to prepare the elderly for life’s good ending. At the training, we realised that UnitingCare has a reservoir of knowledge gained over half a century. Derived from ministry of the laity, the UCA agency has become the largest social service provider in Australia, serving 1 in 8 Australians. Here at Shandong, they put a powerful idea into people’s minds. Dying is not just about death, but also life. To care for the dying is about celebrating life. All skills are built on this ethic and hope.

What then is life beyond death? Death is the end of physical life, but also marks a new beginning in our relationship with God. The hope of passing this life into God’s eternal care is rooted in our faith in Christ’s death and resurrection. It points to homecoming of Christ returning to the eternal life of God. There is nothing outside of this life of God the Alpha and the Omega, the beginning and the end. A Christian death can be a powerful witness, calling people to this homecoming – singing the doxology to praise God.

At the end of the training, the Moderator took the stage to thank the UCA team for the extraordinary contribution of the UnitingCare team. He put forward a 3-way partnership: the CCC national leadership, UnitingCare training, and his synod resources and business sponsorship. His vision also included social service as a part of theological education in order to prepare future leadership to be service-ready. The company also committed to continue sponsorship. As all participants received their certificates, two national directors Lin and Rob thanked them.

“Our UnitingCare team have done the training twice, because God’s love has reached many people through your care”. The President Stuart then blessed the participants – “We love neighbours because God loved us first”.

The meeting in Beijing has been a highlight of this trip. The State Administration of Religious Affairs (SARA) is located in the palace where the last Emperor Fu Yi was born. We were given a private tour through the Emperor’s residence. Our meeting room was his office, a 350 year-old timber building in the classic imperial style. Walking through the complex, we also began to understand this ministry within the State Council. The role of SARA is to develop policy based on the constitution of religious freedom and establish regulations for religious activities. In China there are five historical religions: Daoism, Buddhism, Islam, Catholicism, and Protestantism. SARA has its own foreign ministry department responsible for foreign exchanges with religious organisations.

The meeting was a formal diplomatic exchange. The General Director Dr Xiao Hong and the UCA President took the seats in the front, whereas all representatives were seated on two sides. Compared to the first meeting in 2013, this was a relaxed conversation. After two leaders exchanged views of the UCA-CCC partnership, a nurse was invited to share the story of healing through social media WeChat. The director was moved, and she said “I have seen many overseas groups. You are the first group to have put talk into action.”

The Vice Minister Mr Jiang hosted a private lunch. He took particular interest in two Chinese speaking nurses and asked about their experience in Australia. He recognised the merit of 3-way partnership: the CCC national leadership, the UCA intellectual property, and the local synod and business sponsorship. He encouraged the UCA to “spread the training to different parts of China”. At the lunch, the President issued his invitation to the minister for a future visit to Australia, with the UCA to organise meetings with Australian government and ecumenical churches. The UnitingCare team presented a quilt made by the elderly – average age 83 – for the elderly in China. The minister instructed the staff to put this unique gift in the VIP room.

A week ago, the operation team came to China and faced a challenge. Now they received recognition from the highest authority in China. More than a single success, they have demonstrated a bottom-up approach to shaping social service. Just before boarding the flight for Xian, another reflection took place. The partnership model in China could answer the challenges in Australia. Facing radical funding cuts from the federal government, UnitingCare could invite business sponsorship; this external contribution would be managed by synod level UnitingCare agencies.

Zhuangzi once opened his philosophy book by telling a story. In his dream, he became a giant bird flying over his village and travelled to a different place. Why does philosophy start with a dream? It is very simple: to free oneself from the weight of assumptions.

UW derived from the church’s mission to the margins, and our Reformed Theology is based on the assumption of mission to gentiles. But this week, we saw a different approach. Mission to the gentiles is accompanied by mission with gentiles. This is not a radical idea; UnitingCare and UnitingWorld have been working with the secular government for receiving funds and delivering services. The theological question, however, is thought provoking. Who can give birth to two seemingly opposite missions?