Thriving Church in China – what we learn, what we give. 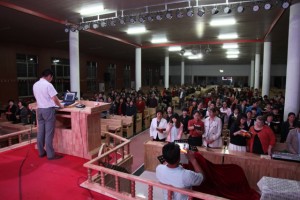 Links between the thriving Christian Church in China and the Uniting Church in Australia are growing. This week, an expert team of Aged Care Specialists from Uniting Care Australia are visiting China to prepare for and deliver a second conference on Aged Care, while next week a UCA delegation led by National President Stuart McMillan arrives to continue dialogue about partnership that will include theological training, people exchange and support for social services.

Reverend Ji Zhang, from UnitingWorld, is travelling with the two teams and writes a fascinating account from Shanghai.

The first part of the UCA delegation has arrived in Shanghai. They are the expert-team from Wesley Mission Brisbane, led by its CEO Geoff Baktin. Shanghai is an amazing city with many surprises. It started as a small county a few centuries ago and was regarded as the Paris of the East before 1949 – attracting many foreigners to come and do business in China. The real change is in the last 25 years; the area of Pu Dong (East of the River) grew from farmland to a city that shares half of Shanghai’s 30 million population.

We’ve been travelling on a 35 km freeway – above ground – linking the airport and the CBD. This freeway was built within 2.5 years. The speed and scale of China’s economic transformation is evident in this city. Yet the city is well-organised through its extensive public transport, including a 300km railway network underground. On the news, Disney started its first month private opening, a test run for the public opening in June.

The rise of the Chinese church is a part of this big story of transformation. We are on a journey to discover this narrative as we travel to the North.  Traveling at speeds of 306km/h, the high-speed train takes us to a regional town with a population of 100,000. Here we meet the church minister and his team. As we walked into the church complex, we see first hand what we’ve been told: “He and his wife have built the church and its social service from ground-up”.

In 2004, the church was built first. Now it has been extended to hold its 4000 membership. At the time they had no experts, so they designed, built, and fitted everything by their own hands. As a part of the transition from a rural community to urban living, one of the main issues they face is the role and responsibility of a family. Children are expected to look after the elderly, but the One-Child policy and migration have forever changed this social code. So the church started an aged care centre in 2009. Today they have 112 beds, look after the elderly with 22 care takers and 48 volunteers; the oldest person is 98 years of age.

Having an aged care centre was only the beginning. In the following years, the church developed a childcare for 178 children, looking after 19 orphans and neglected children. They have created a model similar to Australian aged care facilities, namely a household model of institutional care. The social bond to hold all people together is a combination of Confucian values of care for the elderly and Christian love of neighbours.

What surprised us all was that they achieved all this by donation alone.

Geoff told the minister Xu: “To develop this complex within 12 years is a remarkable achievement.”

Indeed, the development includes four wings of the church complex, and funding for all the care facilities. The inner drive for this transformation story can be put as simply as “faith enabled witness and service”.

We met a 91 year-old man. He was diagnosed as having only 3 months to live when he was sent to the centre. He had no family members to look after him, so the church became his home. When he came he could not stand, could not walk. After 1 month in care, he could get off the bed and stand; now he walks miles each day in the courtyard.

In the evening, we were invited to the church service where 500 people gathered for the daily evening service. The church has 3 services each Sunday, prayer services every morning and devotion services every night. As we greeted the audience from the stage, we began to understand what makes the transformation a reality. It is the gospel that has set people free. Their changed lives became a natural witness to others who seek belonging in the church. More than 600 people were baptised last year. Their natural expression of faith is not only witness but also service.

Theology has been understood as “Faith Seeking Understanding”, from the cognitive mind to social action. Here we have seen “Faith Seeking Hope”. We are inspired by their faith enabled service, and this public discourse is calling us to reflect theologically – from praxis to understanding.

Ji will continue to update us on this fascinating journey as the team delivers their training on Aged Care with the Chinese Church and Mr McMillan meets with the Chinese leadership.  The aim of the visit is to continue to build the partnership between our two churches – sharing knowledge, skills and inspiration for our post-denominational churches.

You can find out about our partnership and how to support the growing Chinese church by reading more here.