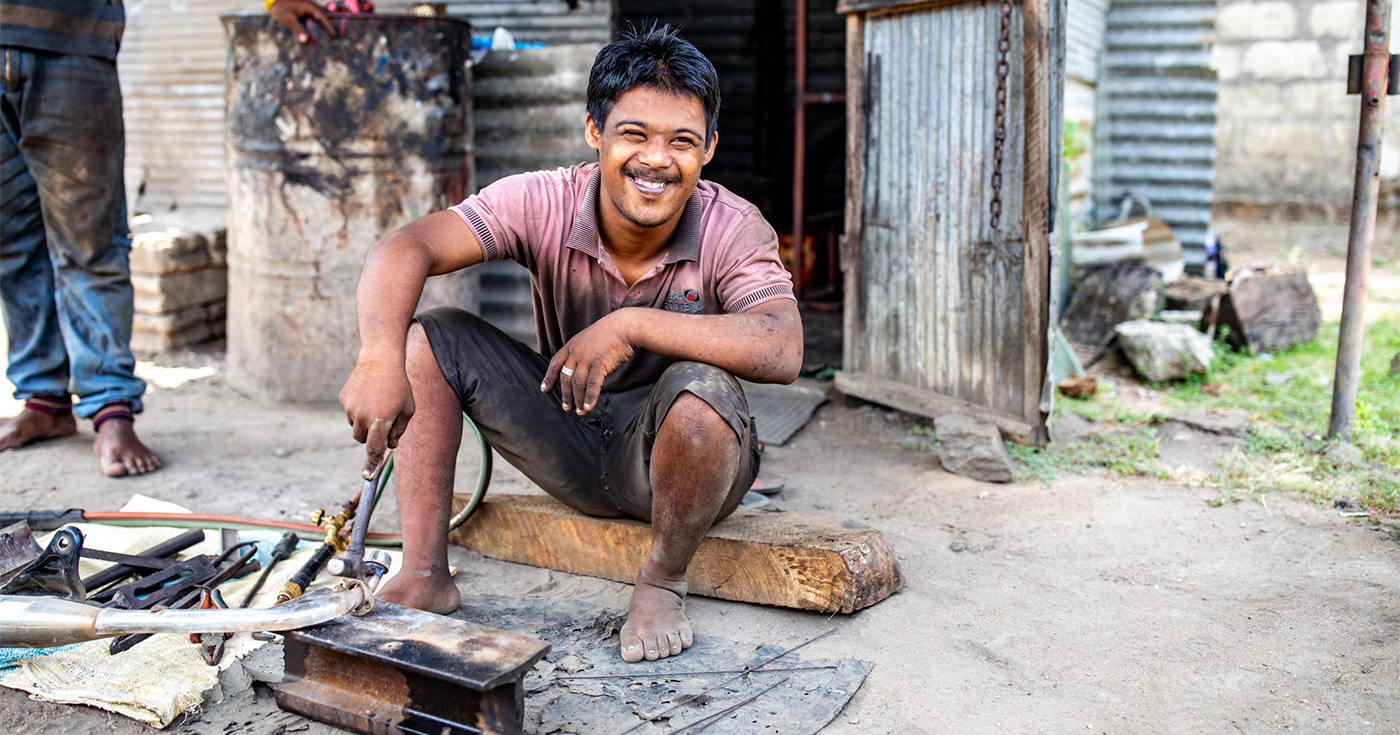 The story I never told (blog)

Almost exactly three months ago, a colleague and I threw on medical masks to board a plane for Colombo, Sri Lanka. We snapped off a few pics for laughs and then chucked them in our bags for the rest of the trip…I haven’t seen them since.

Over five steaming hot days (think humidity so solid you can eat it), I met people who left me feeling inspired and hopeless and uplifted and angry and helpless and all the usual things because #Cathgetsfeels… but one young guy in particular, let’s call him Raj, put down a little anchor in my heart. He has Down syndrome and went through schooling provided by the disability unit of the Methodist Church of Sri Lanka, mainstreamed within his local school. His teachers remember him as ‘cheeky, talkative and always ready with a laugh ❤️’

Finding people who love and respect the value of others, especially those with disabilities, can be a challenge anywhere in the world, including right here in Australia, yes? But in developing countries, that heartbreak is magnified tenfold. The staff in that school weren’t just pinpricks of light in the lives of individuals, they were a blazing counter-cultural beacon. Raj’s family knew it, too. They were anxious about what would become of him once he outgrew formal schooling. Poverty among Tamil people on the east coast of Sri Lanka is much higher than for the rest of the population – and many times worse for people with disabilities.

But Raj struck gold again – the church approached his neighbour, a mechanic, who took him on as an apprentice. When we met him, he was welding bike bits and dreaming of, “never marrying. Just buying as many shoes as I like.” ?? What’s not to love about that ambition? 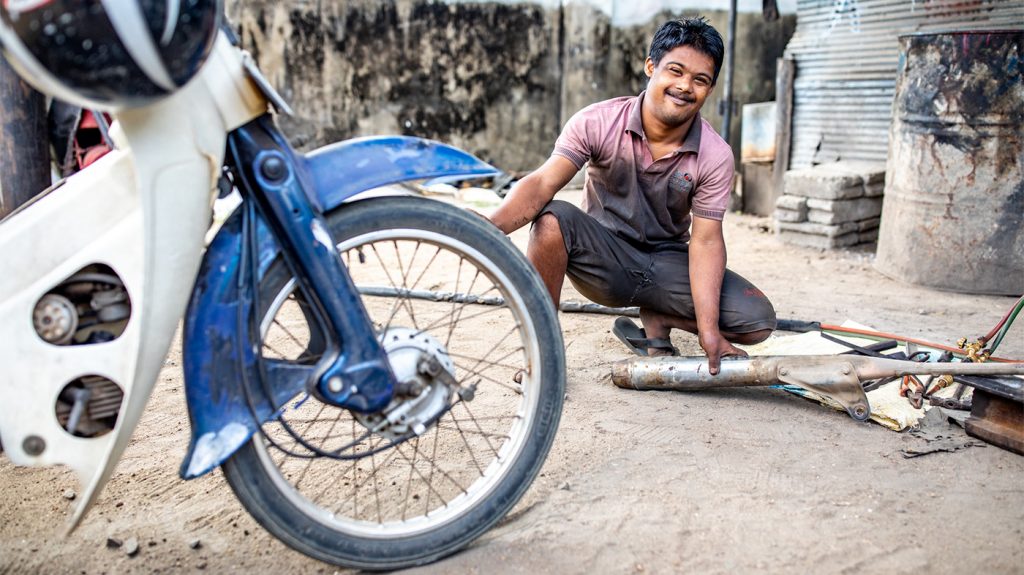 His sense of freedom was as radiant as the sparks from his tools. Inclusive education and an advocate who believed in him have changed his future forever.

We left with his tale and his pics and I promised him we’d tell his story far and wide. Within two weeks of our return, Australia’s borders were shut; since then 349,000 people have died from COVID-19. And this is the first time I’ve spoken about Raj to anyone other than family.

Do you know how many people like Raj, who took the opportunities in front of them and ran for life, face the prospect of being dragged back to poverty’s dungeon as a result of COVID-19?

In Sri Lanka, the streets are quiet. There are no bikes to fix and no school; those with the means clean out the supermarkets on the few days they’re open, and people who relied on a daily wage – like servants, construction workers, small stall holders – have no money for food. Raj isn’t working, isn’t earning an income, and doesn’t have a place to share his grin – not now, and not for the foreseeable future. This is what COVID-19 will take from him and millions of others.

I know it’s not only Raj and people in the developing world who are struggling; it’s also our own families and friends who’ve had jobs and income snatched away, and lost maybe just as much at the visceral level of anxiety and loneliness and hopes eroded. Acknowledging our local need is deeply significant, but it’s not the whole story, and it’s not forever. What comes next?

There’s been so much talk of ‘in this together’ but how long can it last? As our own restrictions start to lift and we put toes back into social and economic waters, how long will we still speak about ‘together’? And who’s included in that category? It’d be so easy for us to try to just ‘get back to normal’, albeit with an even greater commitment to safeguarding ourselves physically, emotionally and economically from another event like this one.

And yet for a few more weeks at least, here we are, still a bit raw and nervy with our bellies exposed. For just a few more weeks, the absolute fragility of our lives still hangs in the balance and we feel, perhaps a little, what it might be like to be without job security, or deflated entirely by the reality of what’s hit and what’s to come. And maybe even a bit alone.

We know that when budget time comes around next, the Australian Government will most likely raid the foreign aid budget to help make up the massive debt we’ve racked up rescuing ourselves from this train wreck. And we know that most Australians will get behind the move, because even though we give 0.21% of GNI (Gross National Income – about 21c for every $100 Australia earns) to support our neighbours, the population in general THINKS it’s about 14%, which they believe is too high and should be reduced to 10% ?. Every single country in the world will do the same. And the people with the least means to survive this thing, once again, will suffer the most.

Tonight, flicking through the pics on my iPhone, I found Alex, me and Raj in a selfie (okay quite a few selfies) and I wonder: how is he doing? What is he thinking? Is there any hope for his future? 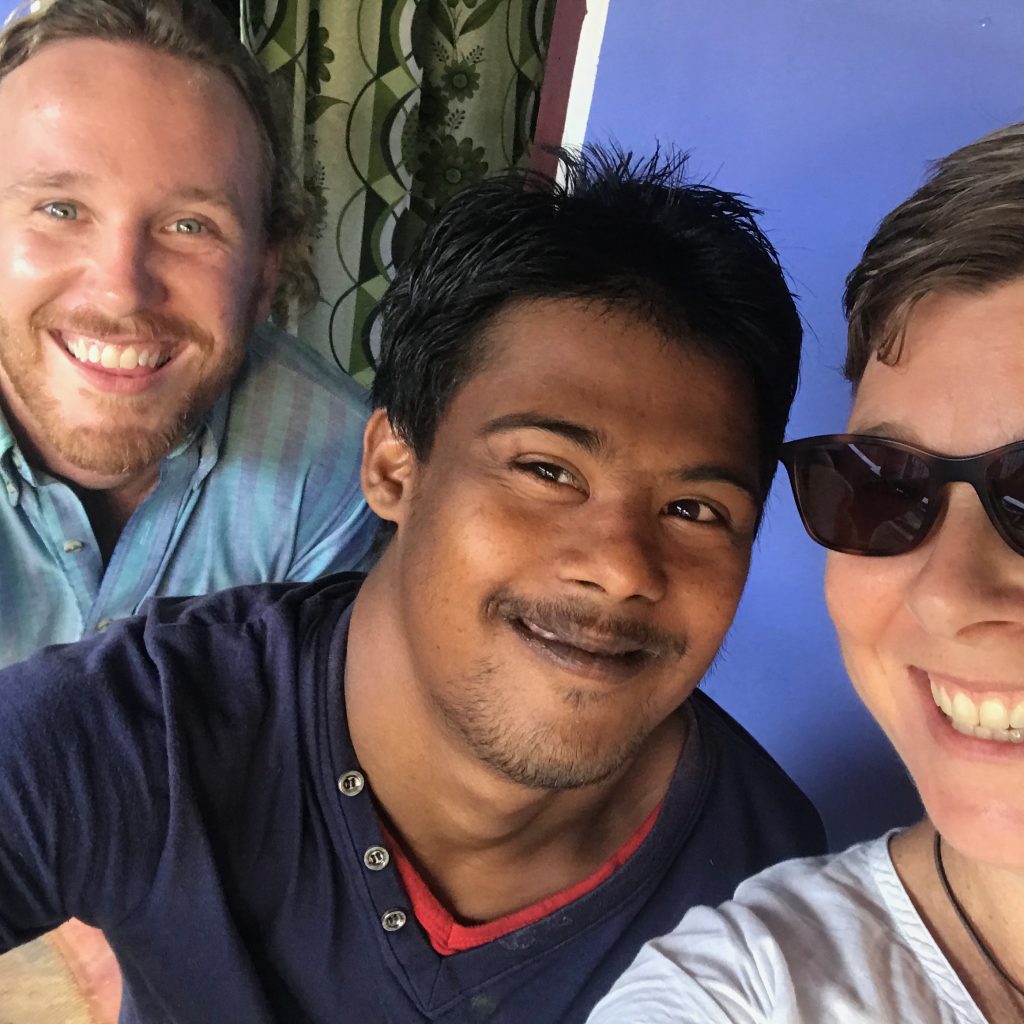 Actually, there is. But it means each of us continuing to embrace the vision of ‘together’ and walking away from the fear that makes us wonder if we have the means to look after anyone but ourselves.

We do. We can. If we were each to give even just a small amount, today, or even better each month, we could be part of making life immeasurably, unimaginably, better for someone like Raj. It really doesn’t take that much- but it gives back out of all proportion.

The video below is the story we told, when we got home, instead of Raj’s. I feel sadder about that than anything. Please take a look and if you can, act. Donations to UnitingWorld can go up to six times as far for people like Raj right now thanks to the help of Australian Government funding.*

I’m delighted to see the way we’ve managed this crisis as a nation and the steps we’re making toward recovery.  But it also breaks my heart that once again, that recovery will be deeply uneven around the world.  Please don’t chuck your mask in your bag and move on forever. This story still needs telling.

*As a valued partner of the Australian Government through the Australian NGO Cooperation Program (ANCP), we are eligible for funding that means tax-time donations can go up to six times as far in the field saving lives. We’ve committed to raise $1 for every $5 for which we’re eligible, and that’s where your donation has its power.

Every dollar will be used for immediate COVID-19 responses providing food and sanitation packs, health information and hand washing facilities, as well as fighting to keep poverty at bay long term through sustainable development projects.