Setting the world aflame from pages of the Bible 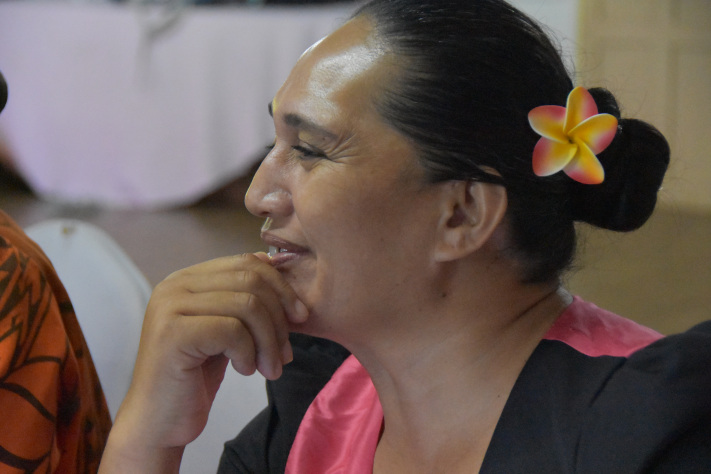 There are probably dents in my forehead from pressing it up against the window pane as Fiji’s coastline sneaks into view beneath us – I’ll never tire of watching the land creep up under the wing tip of a plane as we tilt away from the sun. There’s something about seeing the earth from the air like this: I’m small, I’m huge, I’m fragile, I’m a billion nerve endings all wired-up wrong and firing, like a kid on Christmas morning.  A new perspective is a gift.

This is going to sound crazy, but it’s strangely similar watching a roomful of women from all over the Pacific opening Bibles – of all things – in a whitewashed room lit by painful fluoro strips. The physical environment might be sterile but the mood is suddenly electric. There’s a buzz so palpable I can’t tear my eyes away.

At the front of the room, Pacific husband and wife duo Cliff and Siera Bird, both theologians, are smashing their way through a few cherished stereotypes about Mary Mother of Jesus. (Yep, that one).

And the women are loving it.

Betrothed at 14 to an elderly widower who already had a grown up family – the Joseph of a surprising number of historical studies – it turns out Mary probably had more sass than anyone in the room could have imagined. Cliff explains her boldness: not only does she question the angel who delivers the message of her ‘chosen’ status, but she also fearlessly delivers the tale of her pregnancy to her fiancé, Joseph, knowing what the likely consequences will be.

As the dust settles on these revelations, you can practically reach out and touch the admiration in the room. On Instagram, someone is tagging Mary #yougogirl. Or they want to.

And it’s not just Mary who’s up for the high fives. Duped into what looks pretty much like ‘buying used goods’, Joseph would have been well within his rights to abandon his wife for her unbelievable tale of angelic impregnation, leaving her to be stoned on her father’s doorstep. This is a time and a place where women have few rights, are the property of men and expected to be virgins at the time of their marriage (although men aren’t.  Some would say not much has changed in many parts of the world.) Instead of disowning his shamed bride-to-be and leaving her to her fate, Joseph chooses to believe her story and stand by her side.  It’s a pretty unlikely twist: in a culture where violence against women was commonplace, the continued engagement and subsequent birth of Jesus is a triumph of epic proportions.

The women in the room in front of me – from Samoa to PNG – understand this all too well. They live in some of the most dangerous places in the world to grow up female. Many stats suggest three in four girls from the Pacific will experience violence at the hands of a family or community member.   For the first time, it probably strikes many of us how extraordinary it is that instead of slinking away quietly to hide her shame, Mary stands up and speaks boldly of her chosen status. And instead of leaving her to a violent end, Joseph keeps the faith and walks with her to Bethlehem and beyond.

This story not only flies full in the face of the accepted cultural norms of the day, it lights a wick under the kind of relationships so many are living in the Pacific and other places around the world right now. Is Christmas a sanitised tale of a sweet young couple in love and ready to bring into the world God’s baby son, or is it also a grenade under a culture close to home of casually accepted domestic violence and toxic relationships?

This is the Bible taught in a way that holds up a powerful mirror to real life and leaves people reeling in its wake. This is theology as it was always intended – spark to tinder, the wide arc of the lighthouse before the ship smashes on the rocks, that song you hear once and search high and low to hear again.

It’s the earth seen from the air, but it’s also the excitement of touchdown and new places to discover.

Watching it unfold – knowing the impact this teaching is having and will continue to have on Pacific women and men – I can’t help but feel the loss of that same teaching in my own life and the life of people I know in churches around me. When did we stop seeing the way the bible can rip us open, peel back our layers and turn us upside down? Or maybe it’s just me.

Either way, teaching on gender, violence and equality through the Scriptures is lighting fires in the Pacific like nothing else can. Christianity here is the cultural bedrock of society – secular human rights organisations, feminists and NGO’s have no tool that can equal it for influence. Right now, there’s still a prevailing sense that a woman belongs to a man; that a woman’s place is in the home; that what a woman can do, a man can do better. This works its way out in sexist practices, domestic violence, heart-rending stats relating to abuse, and paltry rates of political representation that are worse even than in the Gulf States.

But as the work of people like Cliff and Siera spreads throughout the church and society, we’ll see a shift.  It’s coming. You can see it in the faces and the voices of 15 women from the Solomon Islands, Papua New Guinea, Vanuatu, Fiji, Kiribati, Tuvalu and Samoa – turning the pages of their bibles with hands that almost shake.

Real theology is a flame, and all over the Pacific, people will see differently in its light.

I was in Fiji for UnitingWorld to report on the Gender Conference for the Regional Women’s Fellowship May 23-29 2017.

The workshop is part of UnitingWorld’s Partnering Women For Change program, which is part funded by Australian Aid.

Find out more about the project