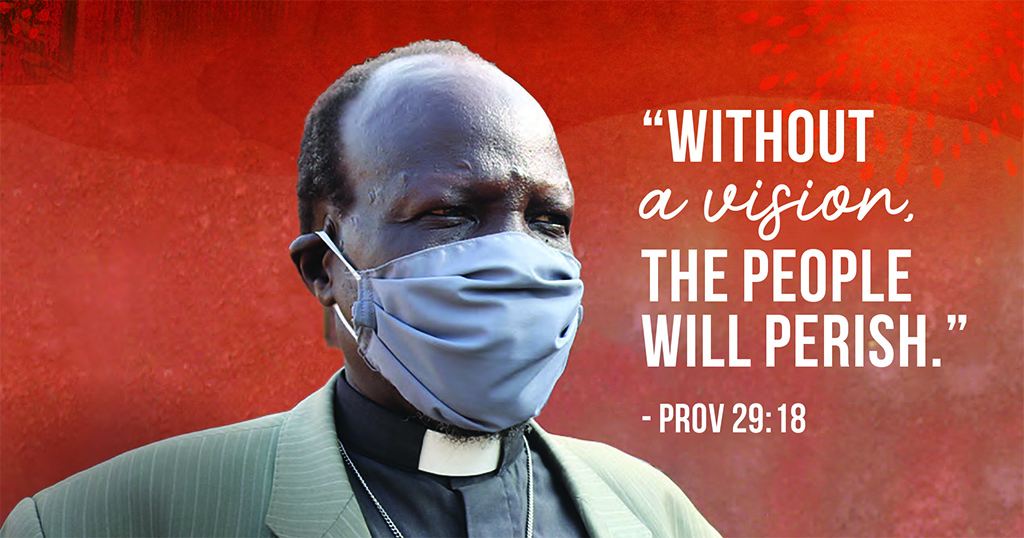 2020 is a year none of us could have predicted. Two thirds of the way through, Rev John Yor is clinging to his vision of a better future despite an unfolding nightmare that threatens everything he has worked for.

“I always wanted to serve my country, South Sudan, perhaps as an accountant or government official,” he says. “But God called me to the church, and I know this is where I’m meant to be.”

South Sudan is in the grip of the worst humanitarian crisis in its history. Seven million people are at risk of starvation as drought, lockdowns from COVID-19 and increased violence choke food supplies. In the midst of despair about political leadership, the Church is consistently at the forefront of peace negotiations and providing practical care for the nation, which gained independence from Sudan in 2011.

Rev John, now General Secretary of the Presbyterian Church of South Sudan with oversight of peacebuilding and humanitarian projects, has long had a vision for leadership.

It comes, though, at an incredibly high personal price. Married to Liza, he’s the father of six children aged between 13-28, one of them adopted when her parents were both killed.

But the family haven’t lived together for years – it’s simply too dangerous for Liza and the children to stay in Juba. Right now, John is living without running water or electricity in his home, and on the day we speak he has only two slices of bread saved for his dinner.

He hopes the water tanker will replenish his supply in the next day or so, but conditions have been incredibly hard for weeks, and he is recovering from a bout of malaria.

How does he persist when life is so difficult?

For Rev John, it’s a matter of faith, hope and love.

“In my heart I hold the words of the writer of Ecclesiastes: For everything there is a season,  and a time for everything under heaven.

A time to mourn, a time to laugh…a time for  war and a time for peace,” he says. “I don’t know when peace will come to South Sudan, but I love my people and I will be here when it does.”

Through your faithful giving, you’ve helped us support John and the Presbyterian Church of South Sudan team as they train leaders for peace and to address the trauma of conflict. Now, our partners have turned to responding to the immediate threat of hunger and disease. They’re distributing soap, face masks, food packs and critical information about staying safe as they wait for lockdowns to be lifted so they can return to their leadership training. They need our support, too, for their own survival. It’s their vision and steadfast commitment to a better future for South Sudan that will ultimately lead to change.