5 ways to get better at changing the world 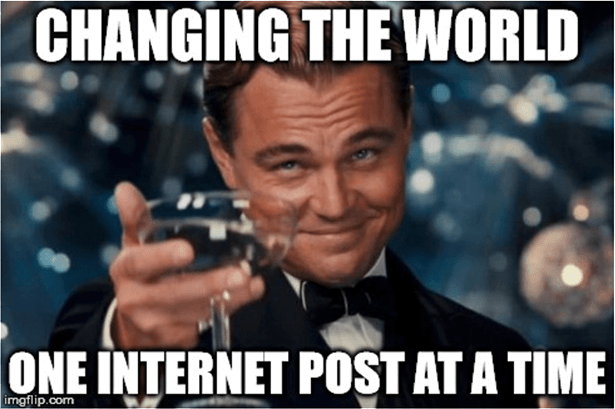 Do you ever feel like your attempts to change the world fall on deaf ears? It’s a pretty common experience.

Here are 5 quick ideas to help engage others for good.

We like to think we’re motivated by facts and logic, but we’re not. We’re biologically hard wired from way back to feel first, act next and think last. (Sabre tooth tiger FEAR! THREAT! RUN!) Only later does our rational brain engage – by which time, feelings are out in front.

What that means:  What are people likely already feeling about the thing you want to change?

We’re all far more willing to consider new ideas when we feel happy and encouraged – how can you help create that environment?

Share good news about the issues you care about and have the kind of presence that people warm to.

Tell your own story about why an issue really matters to you. If there are negative emotions involved in that – rage, sorrow – that’s okay too. Just be mindful about who you’re talking to, how they’re feeling and what you want to achieve. (More on that below)

We are far more likely to change our minds, give money or take action when information is delivered by people we know and like – other members of our ‘tribe.’ A lone monkey is a dead monkey- belonging to a group is critical to our sense wellbeing. No one changes ‘groups’ unless they feel safe and welcome in the new space, and although we’re more connected globally than ever, it’s mostly with people who think the way we do. We put each other in camps and those outside our camp have little chance of influencing our thinking and acting.

What that means: while you don’t need to stick to preaching to the converted, work most within your genuine sphere of influence – who likes and knows you?

Where are your common spaces, and which edges can you help shift a little toward the outcome you’re looking for?

If you have a shared faith, a shared love for your family, or other common interests, that’s fertile ground. Gently put down some seed, sunlight and water and you’ll have a shot at growing something people are ready to take on board. New, but not too radical!

You’re going to need to invest a lot more time into people with whom you have few similarities if you want to genuinely create change. That doesn’t mean you shouldn’t try, but be mindful of what you’re up against and where you can best spend your efforts. Ask yourself: what’s the best strategic way to engage? And be really careful not to sneer or attack those with different views – people don’t gravitate toward groups that belittle them.

The social change team is made up of a whole range of players – quiet influencers, protestors/activists, advocates, public communicators. Each has its pros and cons.

That’s why we need each other, and we need to know in what way we find it easiest to create change.

What this means: What kind of changemaker are you?

Invest in developing that part of yourself and don’t beat yourself up if you don’t do things the same way as others.

We all need each other.

4. What about bad news and negative feelings?

It’s true that bad news is shared more quickly and widely than other news. That’s why our news cycle feeds on drama and despair – there’s no money without eyes on pages and screens. Terrible things do need to be addressed. But we need to be really clear about what we’re aiming for when we raise these issues.

What this means: Make sure you have an outlet for feelings like rage or sorrow among people you know and trust. Be careful about how and when you take that public.

While it’s fair to vent about the appalling treatment of women or indigenous people, what’s your goal? Personal processing or creating change?

They’re both valid, but they’re different. Be clear about what you’re trying to achieve.

To quote Mark Twain: “Action speaks louder than words, but not nearly as often.” While you may not think you’re taking action, someone has suggested that all you need to determine what a person cares about is access to their bank statements and the call/message list on their phone.

What this means: We have more power than we realise in terms of taking action.

Find the nearest point where the issue impacts you and get hands on.

Write to someone. Give a donation. Start a study group. Pray. Support local women, use less electricity, visit asylum seekers in the community. People tend to follow the example of others more closely than the rhetoric.

Want to know more about the process of persuasion and change?

Thinking of helping us share the news about our campaign to beat poverty and build hope?

Below is our campaign video and this is the link to download and share it to your own networks via email or a text to people you think will be interested. You could also share on Facebook and tag some friends who you know will be supportive.

Adapt your caption to suit your own voice, but you could use something like:

“Love this video! A really inspiring look at how UnitingWorld are helping people take control of their lives, build hope and end poverty.

At the moment donations to UnitingWorld will have up to six times the impact due to their partnership with the Australian government, which seems like an incredibly effective way to share our resources. I’m going to donate because (why would you give to this?)  Click the link here if you want to know more.”