Thriving Church in China Part 3 – A Meeting of the Minds 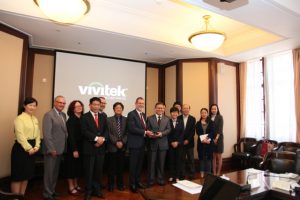 “When friends come from afar, how could one not be happy?”

This Confucian saying captures the spirit of the third meeting between two presidents, one from the Australian Uniting Church, the other from the China Christian Council.

“We are here to continue our relationship”, the President said.

For the ancient Chinese, a myriad of things derived from the interplay of two dynamic forces, Yin and Yang. Today the relationship between our two churches is underlined by a sharing – not only of joys, but also challenges – within the universal Body of Christ.

At the meeting three national leaders, Rob Floyd, Lin Hatfield-Dodds, and Andrew Glenn reflected two arms of this relationship: theological education and social service. Since 2010, there have been 7+7 mutual exchanges supported by the UW relational platform. In 2013, we jointly held a historic conference on Theology of Unity. In response to the ageing society we see in both countries, UnitingCare conducted two training conferences for 200 people. These two arms of engagement can be summarised as “unity in theology” and “unity in praxis”.

In 1984 when Bishop K. H. Ting visited WCC in Australia he requested a meeting with the UCA leaders. When he was asked why, he replied: “I have read your Basis of Union. We have a lot to learn from the Uniting Church in Australia about a theology of unity”. Stuart recalled this story in Rev Prof Andrew Dutney’s book. Indeed it has taken 30 years for us to recapture Bishop Ting’s foresight. Within this relationship, there is a core value overlapping two identities, namely God’s reconciliation in Christ Jesus. “Inner virtue enables outer ruling”. Our doing derives from our being.

Travelling to Nanjing was comfortable and quick. The 300km section is a part of 1400km railway built during the Global Financial Crisis. It took 3.5 years to complete and cost trillions of RMB. Although the tickets would never pay for the construction (A$30 to Nanjing), the network is designed to create a “same-city-effect”. It takes about the same time to Nanjing (65mins) as from one side of Shanghai to the other. The railway links an economic zone with a radius of 350km, and tax income pays for further development. China has a 16,000km high-speed railway network, and it will reach 30,000km by 2020.

In Nanjing we visited the Mausoleum of Dr Sun Yatsen(1866-1925). On the gate, there were two characters 博爱 – unbound love. When the last dynasty collapsed under the colonial powers, Dr Sun started the revolution in 1911 to replace the imperial system with a state of Republic. Married to a Methodist, one of three sisters of Song, he combined Christian love with Confucian morality and used the unbound love to heal the wondered nation. His “Three-People Principles 三民主义” – People’s Governance, People Livelihood, People’s Authority – replaced the idea of Son of Heaven, and moved politics from the One to the many. The job of a government is to “Serve Everyone Under Heaven 天下为公”. Forever he rests under the cosmic potency: “The Heaven and the Earth is set upright by Qi 天地正气”.

In the first week of Pentecost we came to Nanjing Union Theological Seminary. After a successful theological conference in 2013, we visited once again to speak about the practical implications of unity. Four speakers took the stage before 200 students. They spoke about their fields of leadership and also formulated four questions for further discussion.

These questions invited students to form discussion groups. After 10 minutes of animated discussion, each group was invited to present their findings. The speakers were very surprised and encouraged by the answers: thoughtful, articulate, and targeted.

This week’s lectionary teaches us a biblical lesson: The Spirit’s renewal = God’s movement + people’s correspondence. Here among the students, it is evident that the Spirit is renewing the church. Where is God in all of these? God is moving in the margins. Missio Dei has called the church into being. We have been invited to participate in, and contribute to, people’s correspondence.