“We should look after our own first!” 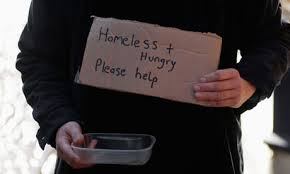 Why should we send money overseas to look after others while some of our own homeless, indigenous people and elderly aren’t adequately cared for?

Great question.   “Charity begins at home” and there are still far too many people in Australia who live in poverty.

Most Australians agree that we should put our own people first and believe me: we do.

In our Federal Budget,  98.8% of all our spending is currently directed at looking after Aussies: Australian health care, education, welfare, defence spending and so on.

But what about the other *1.22%? Should we dedicate our entire budget exclusively to Australians until we all have a standard of living we find acceptable?

A couple of things to think about.

Unfortunately, we could probably spend every last cent of our budget domestically and at least some of these same problems would persist. Why? There are lots of reasons but in general, problems like intergenerational poverty and homelessness are highly complex. It’s possible that no amount of cash alone can solve them. While we can always do better, if directing 98.8% of the budget internally hasn’t completely solved the problem, it’s unlikely that 100% will fix it either. This means we need to work harder and smarter at addressing these complex issues, but the fact that they currently still exist may not be a good argument for withholding all assistance to other desperate people simply because not every Australian has the standard of living we’d like.

It’s an interesting fact that some of Australia’s most disadvantaged people are among its most generous when it comes to giving to others.  Maybe we really can spare that 1.22% for people living in truly desperate situations in other parts of the globe.

Gone are the days when we could think of ourselves as an island. These days the world is more like a street. So imagine this: you can get your own house in order, but if a couple of the neighbours are in trouble, it won’t be long before their situation has an impact.   If our neighbours are in conflict, there’s a chance our children will get caught up in it while walking home from school, and even if we try to avoid the area, our relative wealth isn’t going to un-noticed. The way we live – particularly if we flash it around while others are desperately struggling –  is likely to cause jealousy and tension in the ‘hood, possibly even thefts or break-ins if people are desperate enough.  And if our neighbours get seriously sick and we do nothing to help, we’ll almost certainly be caught up in the outbreak sooner or later. As our neighbours grow poorer, our real estate prices may fall and our own financial stability will suffer.

That’s how the globe operates too. Even from a purely selfish perspective, it’s to our benefit to live in a more stable world; one that helps countries develop peacefully and equally so that extreme ideas are less likely to get a foothold – the seed bed for terrorism. It’s to our benefit to keep working worldwide against easily communicated diseases; to help hose down conflicts so that they don’t swallow up whole regions; to work for peace and stability between nations so that the economy grows and trade benefits us all.

Aid in all forms – whether it’s assisting refugees, sending development experts, peacekeepers or cash – assists all this. Our world is becoming more and more inter-connected. It’s no longer an option to suggest none of this is our problem when it quite clearly has an impact on our wellbeing and the future wellbeing of our children.

How much bang for your buck?

In theory, most people would be reluctant to suggest that some lives matter more than others – white lives more than black, people in the west more than in other places. If we agree this is the case, we’ll want to save the most lives possible for our dollar, regardless of where they’re from.

Well, here are the facts. At home in Australia, the 1% of our budget “left over” might, for example, ‘buy’ us the lives of a hundred people.   That’s great, but in a developing nation it can save the lives of a thousand people. That’s because very simple, inexpensive changes can mean the difference between life and death for people living in developing countries.

The UK’s National Health Service considers it cost-effective to spend more than $30,000 for a single year of healthy life added to a person. By contrast, Against Malaria Foundation can distribute malaria nets and save a life at the cost of $3,340 per person. Or consider this one. It costs $40,000 to train a Guide Dog to help a blind person in the UK lead a ‘quality’ life. In the developing world, simple operations to cure trachoma induced blindness cost $20. One person with a Guide Dog vs 2000 people entirely cured. 30 lives completely saved or thirty years added to a single life.

It’s absolutely clear that spending money in the developing world is outstanding value in terms of saving lives. While our 1% may not go very far here in Australia, it goes a long, long way in other places.

Put yourself in someone else’s shoes…

I like to think that the question about people in need here in Australia being disadvantaged by sending aid out of the country is asked by people who genuinely care about others – perhaps someone who knows a homeless person or who regularly visits an elderly person.   You’re a person of genuine compassion, someone with a big heart for others. The last thing to take into consideration, therefore, is this: how would you feel if you were trying to care for a homeless, elderly person or child in a country completely without all the benefits of stability, good health and democracy that Australia offers? What would it be like to live, completely by the accident of your birth, in a country where bombs fall, you could be arrested because of your beliefs, you were separated from your children or rape was used as a weapon of war? If you find your situation difficult here in Australia, how much harder would it be in another country? These are the people we are turning away when we withhold our 1.2%.

It’s the right thing to do

For me, the most compelling reason to share our 1.22% (and personally, I think we could share a lot more) is because it’s the right thing to do. We have so much. Life may not be perfect for everyone here, but maybe I can share more of my own wealth, my own time or expertise to help make it happen. And if I believe that every single person on this planet matters equally, I can’t begrudge anyone a share of the enormous abundance I inherited when, through absolutely no merit of my own, I was lucky enough to be born Australian when others were not.  It’s not just my faith that calls me to share.  It’s my simple humanity.

Combine your personal gift to end poverty with an Australian Government Aid grant and make it go six times as far.

(1.22% of the Australian budget is indeed spent on foreign aid. Most Australians hear big numbers trotted out when talking about assisting people overseas and assume the percentage must be huge. It isn’t. It’s 1.22% of the Annual Australian Budget.)